From the earliest days of the United States Mint, uniformity had been sought within coinage designs. For the first several decades in operation, this goal had been met with variable success. While most designs were fairly similar, small differences were often noted and because of the rapid pace of design changes, the uniformity was often short-lived. The first true success came in the 1830’s when Christian Gobrecht’s Liberty Seated design was adopted across all silver coinage from the half dime to silver dollar. The design had been based on a sketch prepared by Thomas Sully depicting Liberty seated on a rock, drawing inspiration from the depiction of Britannia on contemporary British coinage. The Seated Liberty Dimes featuring this design would be minted from 1837 to 1891 and include issues ranging from common to ultra rare. 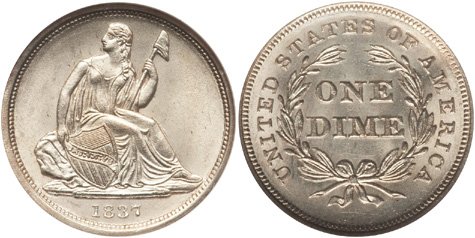 The original obverse design for the series features an image of Liberty seated on a rock, looking over her right shoulder. In one hand she holds a pole with a Phrygian or Freedom cap on top of it, while the other hand rests upon a shield carrying the inscription LIBERTY on a scroll. Besides the date below, no other ornamentation appears within the fields. The reverse design features an open laurel wreath with a bow tied at the base. The inscription UNITED STATES OF AMERICA appears around and the denomination ONE DIME appears within.

By the second year of the series, the first of many design modifications would occur. Thirteen stars, representing the original thirteen states, were added to the obverse. The new design would be introduced in Philadelphia in 1838, with both large and small star varieties created. In 1839, the stars were added to the obverse dies sent to the New Orleans Mint, the only branch mint producing silver coinage at the time. In 1840, additional modifications were made to the obverse design in order to improve production quality. The most noticeable change was the addition of drapery at Liberty’s elbow.

In the early 1850’s the public began to hoard silver coins since the value of the silver content exceeded the face value of the coins. To prevent hoarding and improve circulation, the weight of the dime was reduced and arrows were placed at each side of the date to signify the change. The arrows remained in place for three years from 1853 to 1855. After the arrows were removed, the reduced weight would continue to be used.

In 1860 the series would undergo a more significant redesign performed by James Barton Longacre. On the obverse, the previously present thirteen stars were removed and replaced with the inscription UNITED STATES OF AMERICA. The previous laurel wreath on the reverse was replaced with a wider agricultural wreath. The denomination, ONE DIME was still inscribed at center, but in a taller font.

One final change occurred from 1873 to 1874 when arrows were once again placed at each side of the date. This time the arrows signified a slight increase in weight, following another adjustment to the silver content of the coins.

Proof Seated Liberty Dimes were reportedly struck for each year of the series, however there are a few years where no proof specimens are known to exist. Additionally, some of the early dates are exceedingly rare and only represented by a few examples. For most dates between 1837 to 1853, original mintages were in the single digits. Over the next few years mintages gradually crept higher until 1858 when the Mint began striking complete proof sets for collectors. At this point mintage levels rose into the hundreds and remained at these levels for the remainder of the series with some dates having mintages of at or slightly above one thousand pieces.

View All My Coin Guides Sites →