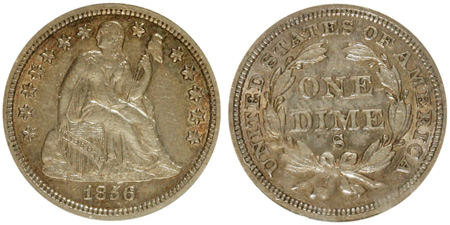 The four San Francisco “stars obverse” Liberty Seated Dimes dated 1856, 1858, 1859, and 1860 (Buy on eBay) all have low mintages and are considered rare, this is especially the case in higher grades due to the extensive circulation of the issue.

The San Francisco Mint had opened in 1854, after five years of private gold coin production by various Mints in the gold rush area of California. The branch mint would also undertake the limited production of silver coins to meet the needs for smaller circulating coinage within the region. Silver coinage was much needed in the region and virtually unheard of in circulation, especially near San Francisco.

The 1856-S Liberty Seated Dime had a mintage of 70,000, followed the 1858-S and 1859-S dimes with mintages of 60,000 each, and the 1860-S dime with a higher mintage at 140,000. These relatively low mintages went overlooked at the time and each of the issues circulated heavily. There were few coin collectors active on the west coast in the late 1850’s, and in the east, few collectors paid attention to mint marks. Given these circumstances, the survival of high grade examples of this issue became a matter of pure chance or luck.