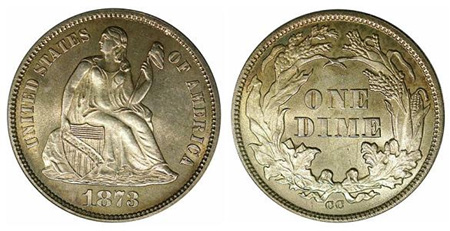 There is only a single example of the 1873-CC “No Arrows” Liberty Seated Dime (Buy on eBay) known to exist. The unique rarity was created through a set of unusual circumstances.

Records show that the Carson City Mint produced 12,400 dimes with no arrows in 1873. However, when the weight standard for the coins was changed, these pieces were presumably all melted to be recoined into dimes with a slightly heavier weight, and arrows placed to either side of the date to denote the change. Apparently a few pieces had been saved for assay purposes, and a single example from this group was retained for the mint cabinet.

Many years later, in 1909 a pair of gold $50 patterns were sold to future Secretary of the Treasury William Woodin. A furor arose since these unique patterns never should have left the mint. To reverse the trade, crates of rare coins and patters were traded for the two pieces. Included in this group was the unique 1873-CC “no arrows” dime. From there, the piece was purchased by Louis Eliasberg as the final coin needed to complete his collection.

When the Eliasberg collection was broken up and sold, the 1873-CC “No Arrows” Liberty Seated Dime realized $550,000 in 1996. Subsequently, the coin realized $632,500 at auction in 1999. The coin was last sold in 2004 as part of the Jim Gray collection, when it realized a prize of $891,250. Compared to the prices recently realized for similar rarities, that price could very well prove to be a true bargain.