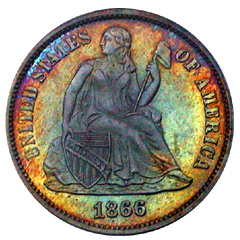 Liberty Seated Dimes were produced at the Philadelphia, New Orleans, San Francisco and Carson City Mints between 1837 and 1891, with only the Philadelphia Mint having a continuous run. It is interesting to note that the Civil War did not have as much influence on the coinage of this denomination compared to the half dimes, although some of the Philadelphia issues of that era are scarce.

The mint mark, for all issues except Philadelphia, is found on the reverse, usually below the wreath. Some varieties for the 1875 issues from San Francisco and Carson City have the mint mark placed inside the wreath.

Production quality of this type varies greatly, and it is difficult to give some sort of standard for each of the Mints. While the Liberty Seated Dimes struck at the New Orleans Mint are notorious for often being weakly struck, this is not always the case, and many Philadelphia and San Francisco issues are also found with weak strikes. For most dates problem-free examples are obtainable, although this task becomes more difficult for some of the noted rarer dates of the series.